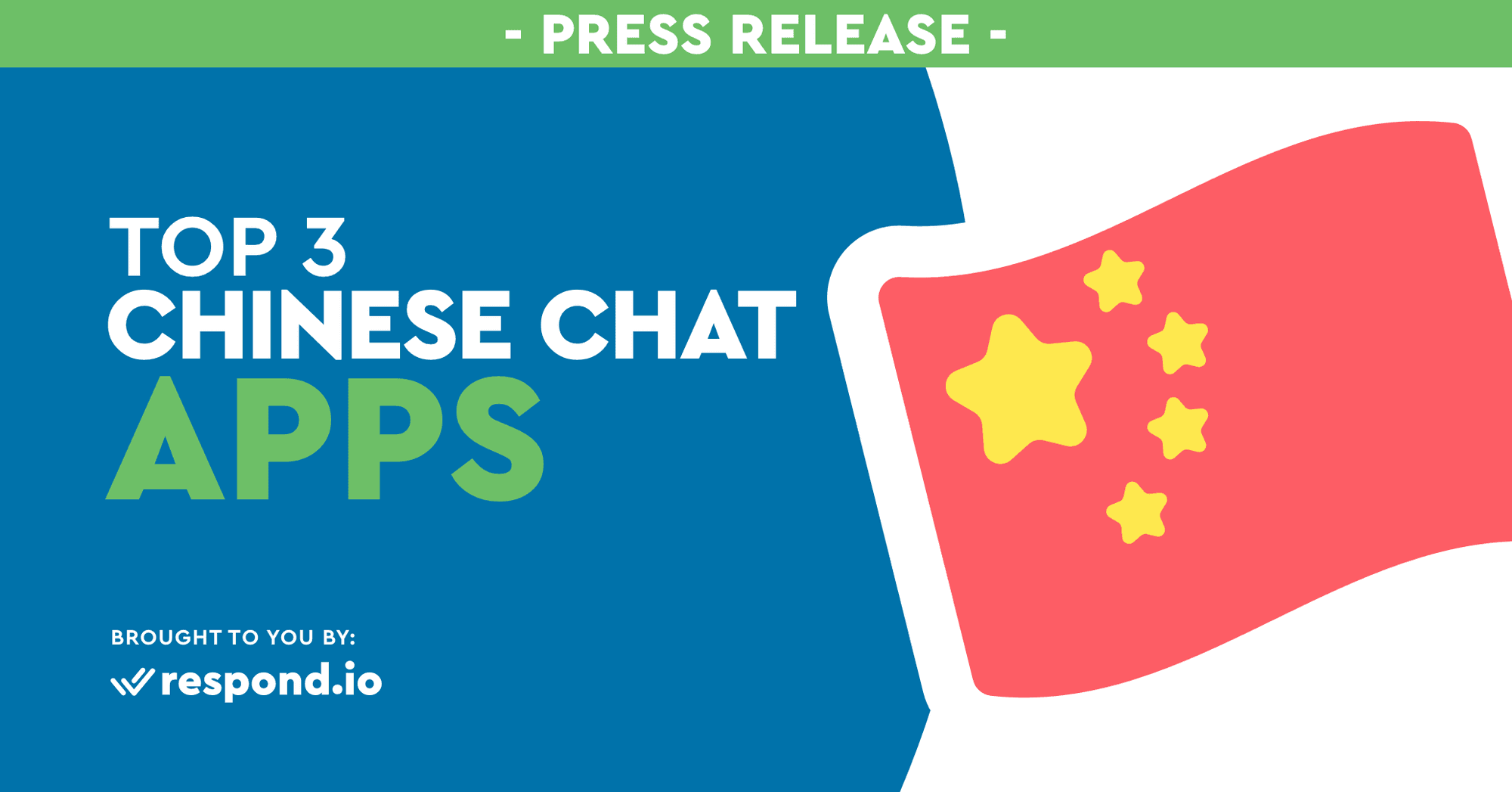 Tony DeGennaro
Tony DeGennaro is an expert in China Social Media. Tony is a passionate marketer with interests in social media, marketing analytics, and search engine optimization. He specializes in Chinese Social Media and Advertising. After getting his MBA with a concentration in Marketing at CUHK he became one of the founding partners of Dragon Social in Hong Kong.
October 16, 2019

Email, Facebook Messenger, and Whatsapp might be the primary forms of communication that we all use in the west. But in China, the Great Firewall has allowed the evolution of a distinct Chinese chat app. Although the Chinese Messenger marketplace has been dormant for a while. New competitors have been launched that might just change the Chinese messaging app landscape. In this article we will cover:

The Chinese Messenger App landscape began with the founder of Tencent, Pony Ma. In the late 90s, Pony Ma first encountered one of the internet’s earliest messaging apps, ICQ, created by an Israeli company way back in 1996. While popular around the world, the service had little to no Chinese chatting or presence in China.

Ma and his Shenzhen based team quickly realized the potential in launching a Chinese chat app. In 1999 Pony Ma launched OICQ (Open ICQ). After a legal battle with AOL, the service would eventually go on to become Tencent QQ, the first Chinese Instant Messenger to go mainstream.

This became the primary form of communication in China until the launch of WeChat in 2011. WeChat now dominates the Chinese messenger app space, with over a 90% penetration rate and over 1 billion monthly active users.

WeChat has become a powerful force in China, being used for everything from business communications to hailing taxis. While challengers have appeared over the years few have been able to capture any significant market share from WeChat.

While WeChat and Tencent QQ are staples in China, new Chinese Chatting Apps have appeared in the last year hoping to take just a sliver of market share from these two dominant platforms.

In this article, I’ll cover these two dominant Chinese messaging apps as well as the challengers hoping to claim the #3 position in China.

What is the leading Chinese messenger app? I’m sure if you have even a passing interest in China, you’ve heard of WeChat. WeChat is often called “The Chinese Internet,” as almost anything you do on the web you can also do on WeChat.

With the recent surge in popularity of WeChat Mini-Programs, apps that live within the WeChat ecosystem, WeChat is more than just a Chinese chat app. Users can book taxis, make hotel reservations, listen to music, read content, play games, send money, buy train tickets, book movie tickets, and even apply for a loan!

Aside from all these features, WeChat is also the most popular Chinese instant messenger in the workplace. This is due to the incredibly low penetration rate of email in China, which was only clocked at 36.7% as of the last report in 2017. While E-mail does see some usage in the workplace, WeChat is an absolute necessity for conducting business in China.

It’s common for both external and internal business communications to be conducted over WeChat. As the #1 social media platform as well as the #1 Chinese chat app, it’s also heavily used by marketers across the country.

Unlike WhatsApp Marketing, which is still in its infancy, a whole marketing industry has sprung up around this Chinese texting app. WeChat is often called the Chinese Facebook and WeChat marketing strategy has gone way passed KOL (Influencer) product placements.

This has resulted in the need for WeChat CRMs and Automation platforms to track conversations, optimize processes, and create personalized experiences for users on the platform.

While all these features make WeChat the #1 Chinese chat app, there are some weaknesses for potential challengers to exploit.

With WeChat being so ubiquitous in China, it can be hard to escape from it. Chinese workers have complained of supervisors monitoring their WeChat activity.

Earlier this year, one Chinese city tried to ban after-work hours WeChat communications to preserve work-life balance. In 2018, an employee reported that she had actually been terminated due to her failing to share content posted by the company’s WeChat Official Account on her own personal newsfeed.

The second weakness is something that we’ve also seen happened to leading social media platforms in the West, a growing disinterest from younger users. Older users in China have begun to take over on WeChat and this has resulted in younger users being driven to more “hip” platforms like Douyin (Tik Tok).

Tencent’s QQ was the first Chinese chat app to go mainstream. It was the #1 Chinese messaging app prior to the launch of WeChat.

While WeChat has taken over and become the market leader, QQ is still a popular messaging platform in China. This Chineses messaging app remains most popular with younger users, who feel safe from the prying eyes of their parents on the platform.

One of the potential upsides of QQ is that you don't need a phone number to sign up. This makes it much easier for very young people to get started with their first Chinese messenger app even if they don't have a mobile phone plan yet.

Noticing the popularity of the platform among younger users Tencent has added features aimed directly at this audience. Some of these features include its entertainment-focused newsfeed Kandian and its E-sports live-streaming service NOW Live.

However, the largest audience for QQ is those using it as an internal office messenger. For desktop-based messaging in the workplace, QQ remains a popular tool. Every Chinese messaging app has its own quirks, for QQ it is a very powerful desktop messenger.

While the desktop version of WeChat has taken some market share away from QQ in the workplace, many individuals in China still use it for workplace chatting and for transferring files. QQ allows users to transfer files with a size greater than 25 MB, which WeChat does not allow.

However, the future of QQ remains in the hands of the younger generations. Tencent has recognized this and plans to continue adding features to increase the average time spent per user on the platform. As of 2018 60% of users on the platform were born after 1990 and 40% of users identify as students.

In January 2019, 3 different companies launched their own Chinese messenger app with the hope of competing for market share in China’s Tencent-dominated messenger market.

First off, is the comically named Toilet. The name toilet comes from a popular song by Andy Lau. The song states that a toilet is a thing every person has, that helps flush problems away making every toilet a friend.

Toilet is a Chinese Messaging App that has a focus on privacy and claims to be the anti-WeChat. The app is completely anonymous, using dynamic IDs to preserve a user's anonymity. The app doesn't offer any over the top features that are worth mentioning, but it has become somewhat popular among users in China who value their privacy.

Although it might be popular it doesn’t seem like this alternative to WeChat would be able to have a strong enough monetization model to challenge WeChat. The app has seen its user base increase but, it doesn’t seem to have any potential for monetization which will likely hamper its future growth.

Next up is Duoshan (which translates to “Much Flash”), a messaging service created by China’s latest tech titan, Bytedance. The app is essentially an extension of Bytedance’s runaway success, Douyin or in English TikTok. The app focuses on allowing users of Douyin to network and communicate with each other.

The app resembles Snapchat in many ways, allowing users to send videos to one another that delete themselves after a certain period. Described by a Toutiao insider as an app with a combination of "Snapchat’s framework with Instagram and messengers GIF functions plus the Apple Watch’s heartbeat.” This description doesn’t really make much sense to me, but as we’ve seen it most resembles Snapchat.

With the support of Douyin and its growing popularity it could be a strong contender to become a player in the Chinese Messenger marketplace. Since it targets the same audience as QQ, it could have the potential to climb its way to the #2 messenger in China.

The final app was predicted to be a runaway success last year, however, it wasn’t able to live up to the hype. Created by Kuairu Technology, Bullet Messenger was able to acquire over 4 million users just 9 days after its launch. Its original popularity stemmed from its minimalistic interface and its speech to text function for messaging.

While its launch was incredibly successful it wasn’t able to keep up the pace, with only 14% of users remaining on the platform a week after downloading it.

The app relaunched in January 2019 as LiaoTianBao (Chat Treasure). The app clearly shifted its focus and now provides cash and virtual currency incentives for users who take certain actions on the platform.

The app is clearly targeted towards the lower tier cities in China, even tying up with China’s most popular group buying platform PinDuoDuo.

However, if you need to pay users to actually engage with your platform, it’s likely not something users really want. These cash incentives personally reek of desperation for me, meaning this is likely no longer a serious contender for the title of #1 Chinese Messaging App.

Which Chinese Messenger Should I Use?

There’s no question that WeChat is the Chinese instant messenger you’ll use. WeChat is so ingrained in daily life you’d be seriously inconvenienced by not using it when traveling in China or dealing with potential Chinese business partners.

For nearly every situation aside from transferring large files, you’re going to be using WeChat in China so get used to it if you plan on doing business in the country.

For marketers out there looking to incorporate messengers into your marketing strategy, which platform you choose will depend on your target audience. For most businesses, the answer will most likely be WeChat, however, if you want to target a younger demographic QQ and DuoShan could also offer results!

If you found this article interesting you may also enjoy our Ultimate Guide to Using WeChat for Business.