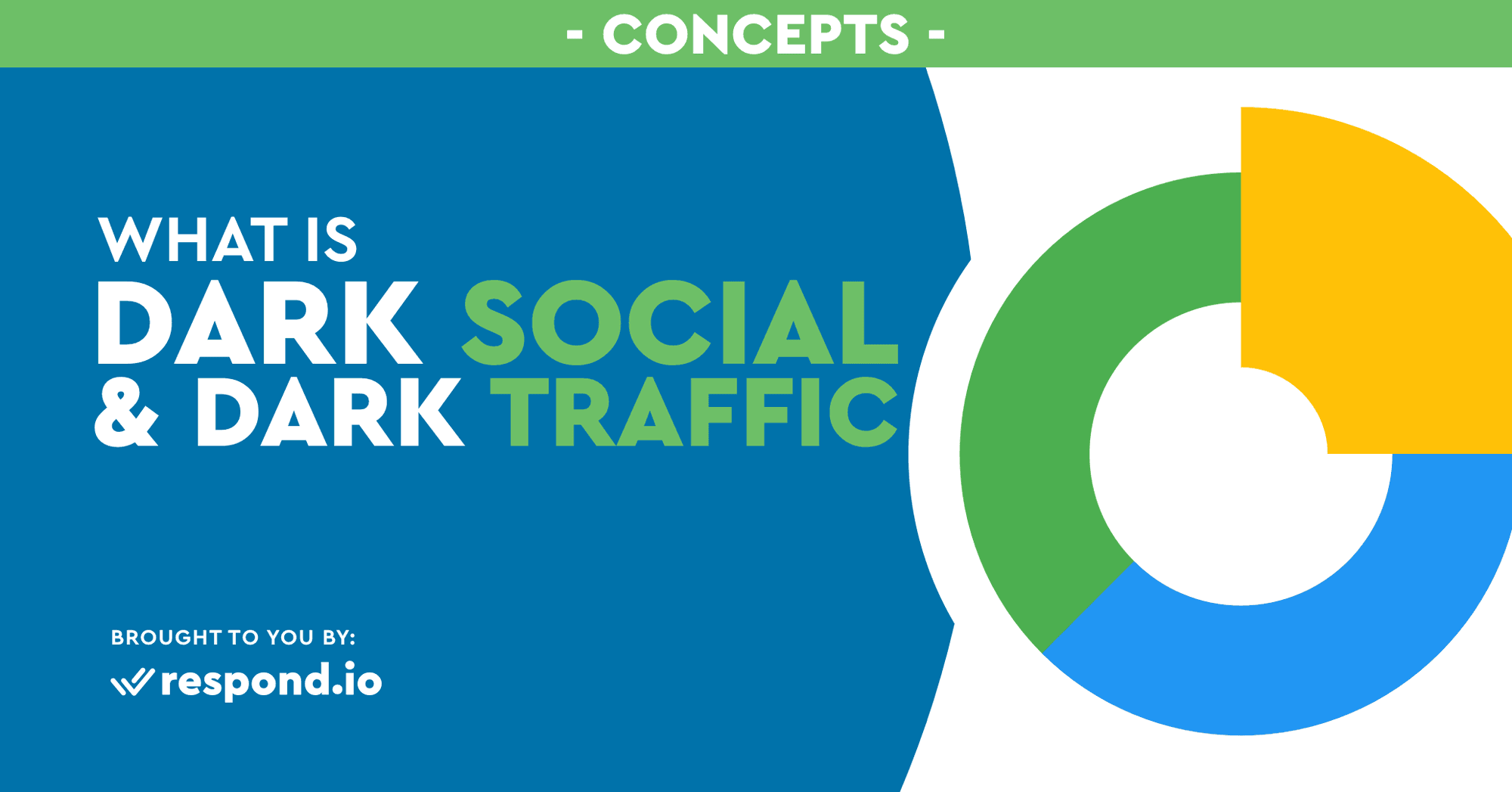 What is Dark Social & Dark Traffic?

Google Analytics is supposed to speak the truth about website traffic. However, looking into you're traffic channels, you'll find 20% or 30% of traffic is coming in direct. The user used a URL to go directly to your page. Fair enough. But, how did they get the URL? And how can you increase that direct traffic? To answer those questions, we're diving into the world of Dark Social & Dark Traffic.

What Is Dark Traffic?

You can think of dark traffic as traffic that is coming in from the dark. In other words, we don't know where it came from. We don't know the source. In Google Analytics, you'll see this listed as direct traffic. In simpler terms, this means the user came to a URL on your site directly, by typing it into the browser or they clicked a link somewhere, but Google is not able to track the source. Dark traffic can come from something as simple as copying and pasting a link from one place to another.

For some, this is a nightmare. Tanya Cordrey, The Guardians Chief Digital Officer, claimed the newspaper was unable to track the source of about 25% of its traffic. A scary prospect for companies depending on advertising revenue. Where growing traffic can be the difference between life and death.

Why can't Google track the source? Generally, because the user came from a closed platform or a mobile channel. For example, when someone posts your link on Twitter or Facebook - Google Analytics is easily able to identify those platforms as the source when the user is browsing on desktop.

When the user is browsing on mobile using the Facebook app, Google Analytics is often unable to know the source (unless a UTM is used) and classifies this as direct traffic instead. If you have a ton of traffic from mobile, you may not be calculating the ROI of your social efforts correctly.

Another common source of direct traffic is messaging apps. If your audience shares your link over WhatsApp or Facebook Messenger or even email and their friends follow that link. Google Analytics won't be able to capture the source, and it will come in as direct traffic. This is one of the sources of Dark Social traffic.

What is Dark Social?

The term dark social describes social sharing which happens in places on the internet where it is difficult to track the referrer or the source. Some of the dark traffic you experience on your website is the result of dark social sharing.

The idea of dark social and the term that came along with it was first brought up by Alexis Madrigal in an article on the Atlantic. Everything started with an anecdote from his youth. When browsing the internet in the early 2000s, most of his exploration of the web was the result of him and others sharing links in an early online messenger called ICQ.

The trouble was that in the early 2010s, the prevailing idea was that the highest value traffic comes from two sources, search engine traffic, and social traffic. However, Alexis had a hunch that somewhere in all that web traffic analytics data there was a mystery source of traffic, traffic that came from online word of mouth sharing, inside closed platforms by people who were relatives, friends, or close to each other in some other way. He coined this term, dark social.

Why Care About Dark Social?

Part of the reason to care about dark social is human behavior. What is the most powerful but difficult to master marketing strategy? Word of mouth marketing (WOMM). What's going to sell you a product faster than someone trustworthy recommending it?

Dark social has more in common with WOMM than with social media. Social media is public and peer pressure amplifies the results. We've all seen the likes get out of hand for something that is less than amazing and people know to be slightly suspicious of something that is being heavily boosted in a public forum.

Conversely, dark social is private and intimate. When a friend direct messages you or a group of friends there is less pressure and more openness. 48% of people aren't comfortable sharing some things in a public forum. This makes dark social sharing highly targeted. When somebody shares some content with you over a WhatsApp message, it's because they think you'll engage with it on a personal level even if it's a bit risque.

The preference for sharing in public channels has been backed up by data. Research conducted by RadiumOne has shown that the amount of sharing conducted over dark social channels had surpassed that on public spaces like Facebook all the way back in 2016.

Although sharing in dark channels has been the preferred activity for years, only recently has this type of sharing become a higher source of traffic than Facebook referrals. In 2018, Get Social analyzed traffic from their customers and learned the amount of dark traffic coming from dark social surpassed that from Facebook public posting.

How To Estimate Dark Traffic From Dark Social

To estimate the traffic received from dark social, you'll need some common sense and access to Google Analytics. As we mentioned, the traffic you receive from dark channels is going to be hidden amongst your direct traffic.

To understand how much of your direct traffic is coming from dark social we're going to make an assumption. When direct traffic lands on site pages like the home page (rocketbots.io) we're going to assume that it's likely that the user typed that into their browser URL bar and chrome auto-completed it for them.

However, when a user lands on a page that is deeper in your site like our How To Automate Your Customer Chats blog post. It's highly unlikely they just typed out that URL, we're going to assume they clicked a link in a space where Google Analytics could not pick up the source.

To estimate dark social traffic for your site, follow these steps in Google Analytics.

Step 1: Analyze how much direct traffic sessions you have on your site in a single month. In this case, it's about 20,000 sessions or 21% of all sessions. You can think of this direct traffic as the amount of dark traffic you're receiving. (It's dark because you don't know the source.)

Step 2: Create a filter that ignores traffic to sessions where the user lands on your home page. (Remember the assumption we made earlier.) In this case, it is about 11,000 sessions or 15% of all sessions.

How To Win At Dark Social

To understand how to leverage your dark traffic and win at dark social, you'll need to provide content for your biggest fans or most significant power users to share in dark channels. To do that you'll want to know what these fans share most, where they share it & how you should share it with them so that they will share it with their relatives, friends & colleagues.

A study conducted by Global Web Index in 2019 gives us a good idea of what people are willing to share over private messaging and other dark social channels.

Of course, funny and highly targeted personal photos are the number one share. However, that doesn't mean you can't participate in the action. Entertaining photos & videos come in as a close second. So take some funny pictures at the office and private message them to the customers you're closest with. That is not something you can do every day though.

Links to websites, deals & discounts and other types of links are all a good bet. It can be something as simple as collecting the most viewed blog posts from the previous week and sending them out to your messaging app contacts. It's something we do weekly with our Facebook Messenger, WhatsApp & Telegram blog newsletters.

It's important to remember that 62% percent of clicks that come from dark social are done on mobile. Make sure the content you share the links where users would land are all mobile friendly.

Another part of the Global Web Index study was designed to understand what platforms are used for dark social sharing. After asking more than 3,000 internet users, they found that:

When you decide that increasing sharing over dark social is important to your company you'll need to justify the expenses you take to do so by being able to understand the return on investment. To do this make sure you use UTM tracking on all the links you send out to your fans.

Use the Google URL Campaign Builder to add UTM parameters to your links. This will allow you to track everyone who clicks your links with Google Analytics. This will give you a better picture of how your messenger marketing efforts are performing compared to your other initiatives.

Once you have the links ready you'll want to broadcast those links out to your messenger contacts, whether it is on Facebook Messenger, WhatsApp, WeChat, Line, Viber, Kik or any other messaging app. We've explained how to do this in detail in our post about sending newsletters over messaging apps.

Last but not least, make sure to add private messaging share buttons to your blog posts & articles.

People are most likely to post links and articles, so make it easy for them.

If you liked this post and you want to master your dark traffic and win at dark social, we recommend that you subscribe to our blog post updates and do some further reading. You can get started by understanding how businesses should be using messaging apps with our Ultimate Guide To Instant Messaging for Business.

Once you're done with that you can go directly into one of our app-specific posts to learn more: