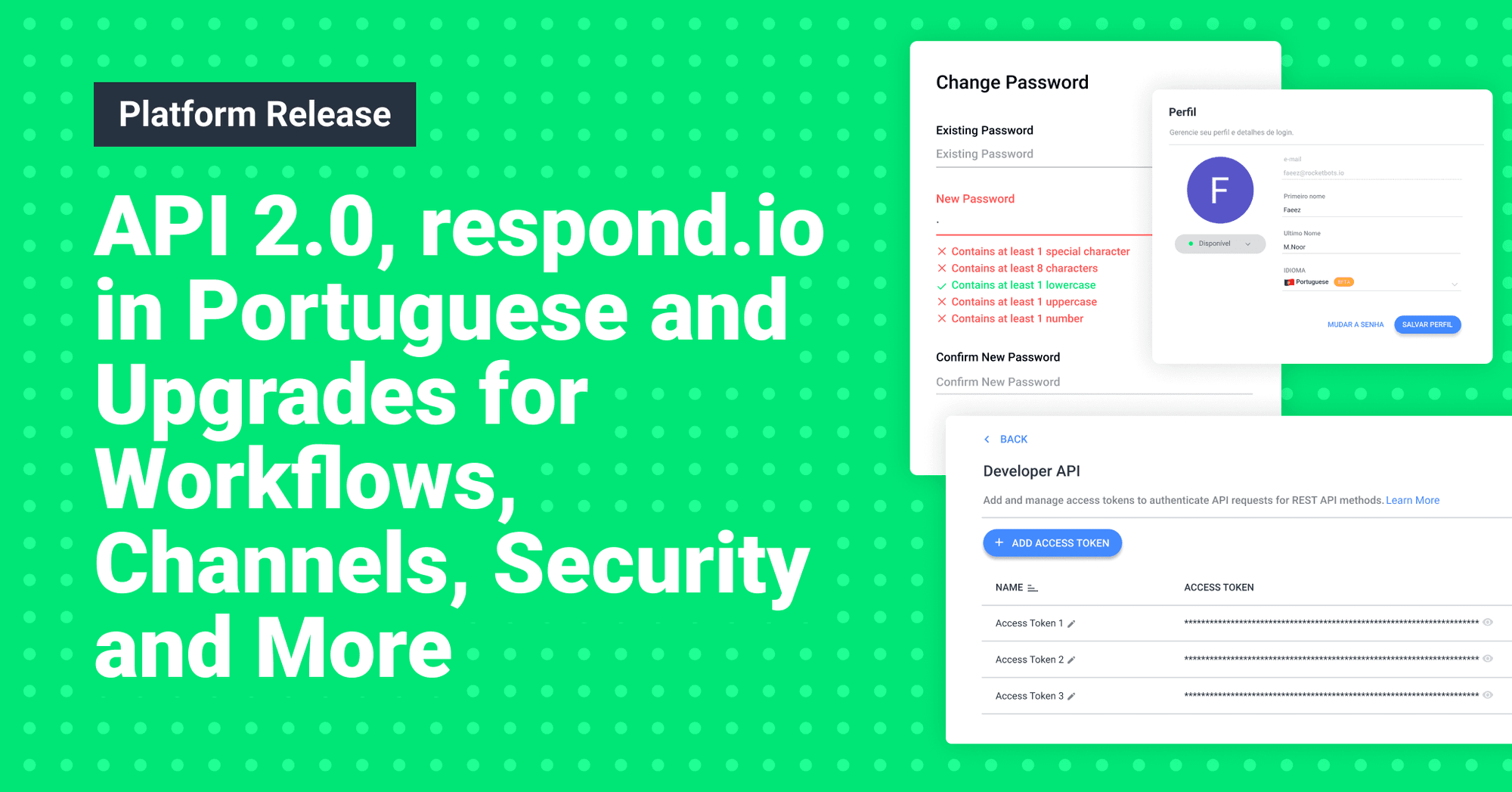 It’s been a terrific month for respond.io, and not just because we’re one of The Information’s 50 Most Promising Startups of 2022! 🥳 From folklore to football, the number 7 has always been considered lucky. After raising $7 million earlier this year, we released a whopping 7 updates in October.

This includes an all-new API, Workflow improvements (7 of them), exporting data on failed messages, localizing respond.io in the Portuguese language, Channel improvements, enhanced security, and a new web app for respond.io. Let’s dive right in.

You wanted to build more robust integrations. In response, we launched API 2.0! 🥳

The previous respond.io API iteration required a specific access token for each Channel and the Contact IDs of Contacts on that Channel as an identifier.

In contrast, the new API works on a Workspace level so you only need a single access token for actions on all Channels within the Workspace. Alternatively, create and manage multiple tokens for specific uses. The API also accepts Contact IDs, phone numbers and email addresses as identifiers.

Actions you can perform with API 2.0 include:

To use API 2.0, go to Settings > Integration > Developer API to generate a new access token and authenticate your API request. Explore all the available endpoints and the respective API responses in our API documentation.

Legacy API endpoints can still be used and will remain stable and supported until further notice. The new API version is only available for Business Plan users and above.

Last month, we announced the release of Workflow templates to help you start building automation quickly. Now, we’ve launched a series of Workflows improvements to cater to an even broader range of business use cases. 💪 Let’s run through them.

The new Last Incoming Message branch condition scans for keywords in your most recent inbound message. Contacts who use these keywords can then be entered into specific Workflow journeys.

This means you can design Workflows that pick up on predefined intent in broadcast message responses, for instance, and automate an appropriate path forward for customers.

The former captures the opening message of an inbound conversation for use as a variable while the latter takes the last incoming message as a variable. You can use these variables within the Workflow, to send the content of these messages to your CRM via HTTP Request, or to create specific Workflow journeys based on the responses Contacts give to broadcast messages.

We’ve also added two Workflow variables based on the Channel ID of incoming messages. The $conversation.first_incoming_message_channel_id variable saves the Channel ID of the channel that opened a conversation. The $contact.last_incoming_message_channel_id variable notes a Contact’s last interacted channel. This is useful for updating a Contact’s preferred or most recent Channel in your CRM via HTTP Requests.

The $conversation.last_assignment_time variable within the Close Conversation Trigger notes the timestamp of the last conversation assignment. How is this useful? For one, you can isolate the amount of time an agent took to resolve a conversation that had been escalated to them without adding the attempted resolution time by the original assignee.

While the metrics in the Reports Module give you overall resolution time, this offers more granular detail on agent performance. Send this data to Google Sheets for tracking or reporting.

Some use cases may require complex Workflows with multiple branches to validate a range of conditions. To cater to these circumstances, we’ve increased the number of Branches you can add in a Branch Step from 4 Branches to 9.

Use Variables as Response Options in Multiple-Choice Questions

You can now use Workflow variables in addition to dynamic variables like Contact ID and name as response options for Multiple-Choice Questions in the Ask a Question Step. Just type the $ sign to open a list of variables you can select from.

Do note that the multiple-choice response field has a character limit of 20 characters. If the variable contains more than 20 characters, the response will be truncated on the Contact’s side.

Now, you can mention or tag the current Assignee of the conversation in the Add Comment Step by typing @assignee. Assignees will be notified when they are tagged.

Struggling to figure out why some messages or broadcasts can’t be sent? We’ve cleared that up for you. In addition to exporting data related to Contacts, conversations and messages, you can now export data on failed messages.

Navigate to Workspace Settings > Data Export and filter the data to show messages that failed to be sent to Contacts. Failed messages will be downloaded with their respective error messages in a CSV file. Errors include:

Data Export is an exclusive feature for Enterprise plan customers. Upgrade your plan to start analyzing those failed messages, pronto. 🧐

Falamos Português! 🎉 Respond.io is now in Portuguese. You can switch your platform language to Portuguese by going to Settings > Personal Settings > Profile > Language. 🇵🇹

In addition to all modules, platform-related emails such as Monthly Active Contact (MAC) limit alerts, payment pending notifications and email invitations to new Workspace users will be in Portuguese. New Users can select their preferred language on the sign-up page before creating an account.

We’ll be launching new languages in the coming months so look out for these updates. Have a preferred language you’d like to see on the platform? Vote for it here and we just might add it. 😉

We’ve made some tweaks to behaviors across our popular channels. 💪

We’ve made significant upgrades to our security infrastructure. 🔐 Among the changes is the handling of password resets. Instead of sending confirmation links via email, password resets will use email verification codes for a better cross-device experience.

Password requirements have also been tightened for existing users who reset their passwords. These requirements automatically apply to new users.

You read that right — Accessing respond.io for your daily use is easier than ever with the new web app.

Download the app by clicking the Open Web App icon in the address bar and saving the app to your desktop. After that, you can launch the app with a click right from your desktop.